It suddenly struck me, the root cause of all the violence, looting and burning we have experienced in Ferguson, Missouri, especially since the Grand Jury’s decision was handed down. It started with the image of the five members of the Rams football team giving the “Hands Up Don’t Shoot” sign this past weekend. But why is this sign and slogan still being used, even after it has been shown that Michael Brown, the young man who was shot, did not have his hands up as a sign of surrender when he was shot and killed? I believe James 3 gives us a clue. END_OF_DOCUMENT_TOKEN_TO_BE_REPLACED

And when they had entered, they went up into the upper room where they were staying: Peter, James, John, and Andrew; Philip and Thomas; Bartholomew and Matthew; James the son of Alphaeus and Simon the Zealot; and Judas the son of James.

These all continued with one accord in prayer and supplication, with the women and Mary the mother of Jesus, and with His brothers. And in those days Peter stood up in the midst of the disciples (altogether the number of names was about a hundred and twenty), and said, “Men and brethren, this Scripture had to be fulfilled, which the Holy Spirit spoke before by the mouth of David concerning Judas, who became a guide to those who arrested Jesus; for he was numbered with us and obtained a part in this ministry.” (Now this man purchased a field with the wages of iniquity; and falling headlong, he burst open in the middle and all his entrails gushed out. And it became known to all those dwelling in Jerusalem; so that field is called in their own language, Akel Dama, that is, Field of Blood.) “For it is written in the book of Psalms: ‘Let his dwelling place be desolate, And let no one live in it’; and, ‘Let another take his office.’

“Therefore, of these men who have accompanied us all the time that the Lord Jesus went in and out among us, beginning from the baptism of John to that day when He was taken up from us, one of these must become a witness with us of His resurrection.” And they proposed two: Joseph called Barsabas, who was surnamed Justus, and Matthias. And they prayed and said, “You, O Lord, who know the hearts of all, show which of these two You have chosen to take part in this ministry and apostleship from which Judas by transgression fell, that he might go to his own place.” And they cast their lots, and the lot fell on Matthias. And he was numbered with the eleven apostles.
Acts 1:13-26

Some interpret the above scripture by finally saying that the selection of Matthias was a mistake on the part of Peter. The evidence for this statement is, “Matthias is never mentioned again anywhere in the Bible.” While that statement is true, it is not evidence that Peter made an error by calling for the appointment of another disciple to take the place of Judas. END_OF_DOCUMENT_TOKEN_TO_BE_REPLACED

Consider Him who endured such hostility from sinners against Himself, lest you become weary and discouraged in your souls. You have not yet resisted to bloodshed, striving against sin. (Hebrews 12:3-4)

Have you ever thought about all that was done in the shedding of Jesus’ blood, starting within the Garden of Gethsemane? Until recently, I had never considered the blood Jesus shed in the garden as being a part of the atonement, but that was the first place His blood was shed. END_OF_DOCUMENT_TOKEN_TO_BE_REPLACED

Recently I had the privilege of reading a book on the subject of Immigrants, Aliens, and the Bible, a subject that I had started to study on my own, but later realized there must be more information available than I was able to glean from my cursory study of the scriptures.

I became interested in the book The Immigration Crisis when I heard a Christian talk show in which the host was interviewing the author Dr. James K Hoffmeier, a professor of Old Testament and Near Eastern archeology at Trinity International University. Because of the current situation regarding illegal immigration in the United States and other western countries I found his discussion intriguing and decided that I must read his book to see if it could help clarify some of my own thinking on the subject. END_OF_DOCUMENT_TOKEN_TO_BE_REPLACED

While reading the Bible a few days ago I came across this rather strange statement in the book of Jeremiah:

To whom shall I speak and give warning,
That they may hear?
Indeed their ear is uncircumcised,
And they cannot give heed.
Behold, the word of the Lord is a reproach to them;
They have no delight in it. (Jeremiah 6:10)

I was intrigued by the thought that God would describe people as having uncircumcised ears and I wondered what that could mean. END_OF_DOCUMENT_TOKEN_TO_BE_REPLACED

O holy night, the stars are brightly shining
It is the night of the dear Savior’s birth
Long lay the world in sin and error pining
Till He appeared and the soul felt His worth.

There are two times in the year which Christians around the world celebrate more than any other, Christmas and Easter. If you asked most non-Christians what they know about Christianity, they would probably speak of Christmas and Easter. Yet, how much do we really know of the celebration called Christmas, and why is it so important? END_OF_DOCUMENT_TOKEN_TO_BE_REPLACED

Thanksgiving is a day to remember that what Americans possess comes from God’s blessing, not our effort. END_OF_DOCUMENT_TOKEN_TO_BE_REPLACED

A few months ago my father asked me about the connection between Mark and Luke, writers of two of the gospels, and Jesus. Here is the answer I sent him. END_OF_DOCUMENT_TOKEN_TO_BE_REPLACED 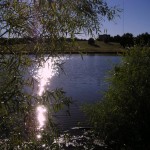 This is a picture I took while visiting the farm of a friend recently. This is a man-made lake and as I approached it, the sun was brightly shining so I sought out a place to photograph the scene where there wouldn’t be too much glare, but the beauty would come through. This is the result.

There are some interesting verses found in the 17th chapter of the book of Deuteronomy regarding government.

Find What you’re Looking For

Blogs of People I Know